History of the Easter Egg, With References!

Have you ever wondered why we decorate eggs at Easter?  We  decorate hard boiled, hollowed out and even raw chicken eggs. Not to mention filling plastic eggs with jelly beans, chocolate kisses, marshmellow "peeps" and other candies.  How did decorated eggs come to be associated with Easter, a Christian religious holiday, which celebrates the death and resurrection of Christ. How did ancient pagan practices celebrating the advent of Spring and Christian traditions merge to produce a secular activity? Read on, and click on the links for references and more information!

Start with the egg as food and symbolism

Poultry eggs have been a human food for as long as humans could find eggs in a birds nest. And probably wasn't long thereafter, in a time of no refrigeration, that people realized eggs don't keep very well.  One way to lengthen the safety of eggs is to hard boil them. Bird eggs have also long been a symbol of fertility, rebirth and the beginning of life.

In Egyptian, Greek and Roman mythology, the phoenix burns its nest to be reborn later from the egg that is left; Hindu text (Upanishads) and Buddhist texts tell that the world developed from a Cosmic egg.

In China, legend tells how the god, Pan Gu hatched from a cosmic egg. One part of the eggshell formed the heavens; the other part became the earth. For 18,000 years, Pan Gu stood between them, keeping them apart by growing ever taller. Finally he became weary, lay down, and died. From his eyes came the sun and moon, from his hair the stars, from his breath the wind, and from his body the earth.

As Christianity grew in Western Europe, the Catholic church adapted many pagan customs. The egg, already long a symbol of new life, came to represent the Resurrection. Some Christians also regarded the egg as a symbol for the stone being rolled from the sepulchre. For the most part, the use of painted and decorated Easter eggs was first recorded in the 13th century.

And during Lent and Passover (Pesach) eating eggs was forbidden, so hard boiling or pickling the eggs were ways to preserve them. See this page for how to hard boil eggs.  Related to this, it is believed this established the related tradition of Pancake Day being celebrated on Shrove Tuesday. In many European and Slavic countries, eggs are emptied out, while keeping the shell intact, then decorated. If you want to try this, see this page about how to blow an egg!

So, if for a week, you can't eat the eggs your chickens are laying, what do you do with them after hard boiling or pickling them? Given the symbolism already established, people began to decorate the eggs!

The earliest Easter eggs were hen or duck eggs decorated at home in bright colors with vegetable dye and charcoal.

Persians, who, like Hindus, in ancient times believed the world was hatched from an enormous egg, were among the first to make use of colored eggs as gifts.

In China dyed eggs were included as traditional offerings made to the god and goddess of the bed.

Early in German history, people made egg trees to celebrate Spring, popular there in the 1700's through modern times. Orthodox Christians and many cultures continued to dye Easter eggs, often decorating them with flowers.

Red-dyed eggs are one of the earliest examples of decorated eggs. An ancient Roman tale associates the birth of Emperor Alexander Severus with a hen laying a red egg, consequently, red eggs were used to guarantee a good crop. In China the birth of a boy was celebrated with red eggs. And in many Christian cultures, eggs were dyed red to represent the blood of Christ.

From th 1300's in Lithuania, a scratch-carving method of producing designs on dyed eggs by scratching or carving the surface of the shell began. This is a very simple method, requiring very simple tools - any sharp pointy tool can be employed. Short, straight, and white scratch lines are the basic elements of design for this method. In the US, Scratch-carving was a technique also used by the Pennsylvania Dutch and Moravians beginning in the early 1800s 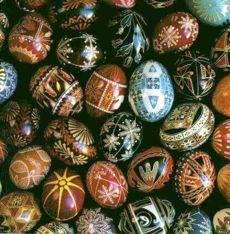 A pysanka is a Ukrainian Easter egg, decorated using a wax-resist (batik) method. The word comes from the verb pysaty, "to write", as the designs are not painted on, but written with beeswax. Pysanky are typically made to be given to family members and respected outsiders. To give a pysanka is to give a symbolic gift of life, which is why the egg must remain whole. Furthermore, each of the designs and colors on the pysanka is likely to have a deep, symbolic meaning. Traditionally, the designs are chosen to match the character of the person to whom the pysanka is to be given.Many other Eastern European ethnic groups decorate eggs using wax resist for Easter. These include the Belarusians (пісанка, pisanka), Bulgarians (писано яйце, pisano yaytse), Croats (pisanica), Czechs (kraslice), Hungarians (hímestojás), Lithuanians (margutis), Poles (pisanka), Romanians (ouă vopsite, incondeiate or impistrite), Serbs (pisanica), Slovaks (kraslica), Slovenes (pisanica, pirhi or remenke) and Sorbs (jejka pisać).

Not all decorated eggs use real eggs or real egg shells.

The renowned Russian artist and jeweller Peter Carl Fabergé made exquisitely decorated precious metal and gemstone eggs for the Russian Court. These Fabergé eggs resembled standard decorated eggs, but they were made from gold and precious stones.

The Persian culture also has a tradition of egg decorating, which takes place during the spring equinox. This time marks the Persian New Year, and is referred to as Nowruz. Family members decorate eggs together and place them in a bowl. It is said that it is from this cultural tradition that the Christian practice originates.[2]
In Egypt, it's a tradition to decorate boiled eggs during Sham el-Nessim, a spring-ushering national holiday celebrated by Egyptians regardless of religion, which falls every year after the Eastern Christian Easter. 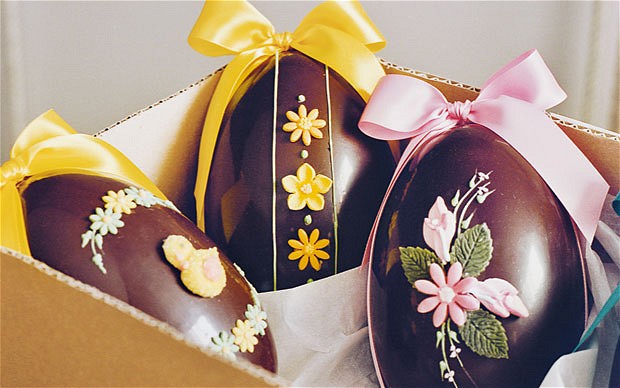 Chocolate Easter eggs were first made in Europe in the early 19th century in France and Germany. Early eggs were solid, until the technique for mass-producing molded chocolate was invented.

The 17th and 18th centuries saw the manufacture of egg-shaped toys, which were given to children at Easter. The Victorians had cardboard, plush and satin covered eggs filled with Easter gifts and chocolates. And by the 1970's, colorful plastic eggs, usually of the same size and shpae as a chicken egg, whoich can be separated into two halves and filled with candy, typically, chocolotae, jelly beans , skittles,M&M', marshmallow chicks, etc have become popular since the 1970's, for obvious reasons thatthey cannot spoil, do not break easily and are favorites with children.  Would you rather have a hard boiled egg or a cand-filled egg, ? Plastic candy-filled eggs are also most commonly used at church and community Easter Egg Hunts.

In the early 1800s, many Pennsylvania Germans included decorated eggs as part of their Easter celebrations. The tradition was strongest in areas of a German emigrations, such as Monroe County, PA.

Children were taught to prepare nests for the Easter Bunny who would lay colorful eggs during the night provided the children were well behaved. The eggs were typically dyed by simmering them in water with onion skins, which imparted a reddish-brown color. Additional colors were achieved with madder root, walnut hulls, hickory bark, and other materials. Most of the eggs were eaten over the holiday, but some were embellished with scratched decoration that was done with a sharp pin or knife in which designs, names, and dates were scratched through the dyed outer coating to reveal the white eggshell underneath. The decorated eggs were then exchanged as gifts.

Czechs arrived in Kansas they brought with them many traditions, one of them being the beautiful art of kraslice, see egg decorating around the world, below..

Egg Decorating Around the world

Easter is a important holiday in Czechoslovakia. One of the Easter traditions is the art of kraslice, elaborate egg decorating, which originated well before the beginning of Christianity. In Czechoslovakia eggs were exchanged by everyone as a symbol of a  new beginning, love, friendship, and good things to come. Children would give their most beautiful eggs to their special friend. Eggs were also given as pre-engagement gifts.

German culture. It was once customary to give away three dyed eggs accompanied by a traditional poem. Satin eggs are sometimes given at Easter. These eggs are filled with sweets and small toys and are used in a game where they are struck together until broken. Easter egg trees were also popular in both Germany and Switzerland. During the 1890s the German Easter egg tree and the Christmas tree were very similar. In Germany, Slavic and Eastern European countries,  the decorated emptied eggs were often hung on an "Easter tree"; similar to a Christmas tree. The first mention of an egg tree in America was in 1876 when a Philadelphia man hung eggs from an evergreen tree. Easter egg trees can come in all shapes and sizes, but the more traditional ones were simply leaf-less branches (from a deciduous tree) that were simply wrapped in cotton . The eggs were often filled with candy and gifts were placed under the Easter tree.

In some parts of Ireland children collect goose and duck eggs during Holy Week, offering them as presents on Easter Sunday. Two weeks previous, on Palm Sunday, they make little nests of stones, and during Holy Week collect as many eggs as possible, storing them away in these hidden nests. On Easter Sunday, they eat them all, sharing with those who are too small to have their own collection. The grownups, too, give eggs as presents in Ireland. The number of eggs to be given away is regulated by this ancient saying among Irish country folk: "One egg for the true gentleman; two eggs for the gentleman; three eggs for the churl [have-not]; four eggs for the lowest churl [tramp]."

Eastern Orthodox faith decorate eggs and take them to church on the eve of Easter to be blessed by the priest.  Easter eggs were so important in Russia that a fair called the Verba, held from Palm Sunday through Holy Week, contained booths that sold Easter eggs.  White china eggs with views of the city painted on them and eggs made of glass containing scenes of the Resurrection were examples of what was sold.

A pysanka is a Ukrainian Easter egg, decorated using a wax-resist (batik) method. See the detailed decription above.

For more information, see the menu bar at the top of the page: Resources and Related Websites